Being situated in Glacier National Park of Canada, requires permits to approach and enter/explore/study this amazing place. I have been granted a multi-year permit to lead a team to do just that. More living in my Jeep coming right up. Good thing I don’t mind the cold too much (I am full of crap being cold sucks).

Currently the only time/season to explore this Cave is the winter, or on either shoulder of winter because Raspberry Rising receives all of the meltwater from the east Tupper glacier.

The Cave needs to be in low flow or the first sump may not be passable. During winter, access to the cave falls under the winter restricted access permit system, in Glacier National Park of Canada. If access is going to be permitted we will not know until 07 30 PT the day of,.. if things are on schedule.

The area will remain closed if the military may be conducting avalanche control with their artillery. 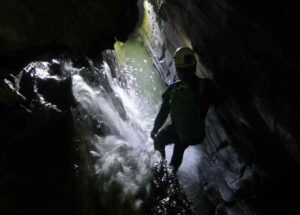 To get to the current limit of exploration the team must drive 3 hours and ski 2km from the parking lot.

The last section of the approach is up a steep avalanche slide path. Then we must climb 190m through 1000m of passages (of the over 2000m surveyed) including passing 3 sumps. The water is 3 degrees Celsius.

We then get to begin mapping and climbing our way through the vertical maze of Raspberry Rising, making sure to be back at the vehicles by our time limit of 23:59 the day of. This necessitates fast and light tactics.

Raspberry and I getting kudos in various newspapers. At least the cave got a good description!

Getting a nod in the Canadian Geographic Magazine!

For such as short section of cave the entrance has quite a bit of history. Below is a summary of what I have been able to uncover, thus far.

People have known about and have visited this cave for over a hundred years!
The entrance to the cave (note above: we are referring to Raspberry Rising as the entrance) has a small record of visitors in the past through the “vandalism” they left behind.

I have included photographs of the “vandalism” (see below) which may be considered artifacts now. There is a noticeable trail leading up to the resurgence in the summer, it is fair to assume a small amount of visitation still occurs, despite it not being promoted.

Proper scientific exploration did not occur here until the McMaster group, led by Derek Ford, arrived in 1966. They explored the system until 1968. 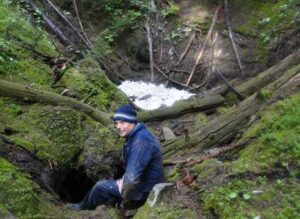 They tried lowering the sump by digging, found Tupper Sink, and Dyegone Sink and confirmed these by Dye tracing to only flow to “Raspberry Spring” (Raspberry Rising). A small drafting cave (un-named) of 30m in length was also discovered close to Tupper sink.

They also dug into Dye-gone sink finding 20m of cave passage, but no way into the main system was discovered. The sump seemed the only good way in.

1971 Mike Boon took up the challenge of diving the sump (possibly Canadas first cave dive!). On the far side of the sump he was turned back on a landing 6m up a waterfall. It would need may-poling to get to the top. In 1981 Mike Boon was back with Pete Lord and Randall Spahl, bringing with them a maypole, to attempt the climb.

They were turned back, unsuccessful. The waterfall was estimated to be 50m high from the water velocity.

Late 1980’s Scott Haggerty (Parks employee) and a friend breath held the sump (Crazy!), to reach the farside. A sketch was done and sent to the Revelstoke office (if it still exists is unknown). No attempt to climb the waterfall was made.

Around 1990, Rick Blak (who died in an accident in Arctomys Cave in 1991) with one other dove the sump but had no intention to climb the water fall. I have not found any more records or reports of exploration through the sump.

I heard about this System through Mike Boon and Jon Donovan in 2007. In 2009 Jon Donovan hiked up to Tupper Sink for a second time with Jesse Martin – his first with Dan Green – to look for a way in from the top (Jesse Martin personal communication). In 2011,

Jon Donovan was up there again this time with Chas Yonge and me (I had began the exploration planning process 2 months prior). We relocated Dyegone Sink and a small cave we named Cavegone. This may be the one found by the McMaster group in the 60’s. We did not have a GPS, so will need to return. It is on the “to do” list.