A leopard gecko sneezing is quite common and is done to expel dust or other particles that get into their mouths or nostrils. I don’t think you have anything to worry about as long as everything else seems okay.

They are very vocal their first year.

Do Leopard Geckos Sneeze? Should I be Worried?

Leopard geckos can sneeze and most times, it is perfectly normal but other times, it could be a sign of an underlying sickness.

If it was a sneeze or two, I wouldn’t be worried but if I noticed other breathing concerns or too much sneezing then probably gets her respiratory system checked.

But it could be a “throwing up sound” you’re hearing too. It sort of sounds like a sneeze, but they are more of forcing/exhaling out their air really fast to dislodge whatever came out of their stomach (usually, their stomach expels something, but since leopard geckos don’t have any gag reflex, they “cough” and shake it out).

If your gecko is doing this then you might have also observed it quickly shaking its head violently when the sneeze sound happened – that’s how they force out the un-stomach-able food.

To confirm it was throwing up something, look around the whole enclosure for dead prey. Whatever you usually feed her – waxworms, mealworms, crickets, etc., just look for it dead, possibly a bit moist still, and probably in an elongated position (it went down and came up the throat).

If after searching, you find nothing, then either:

Now, don’t panic! Lizards throwing up is relatively normal. It probably ate something too big or ate too much. You only need to be concerned if you notice they are throwing up often/in a row.

Leopard geckos do yawn and perhaps that is what is happening at the moment. Yawning usually lacks any sounds along with it, and will only happen once or twice. Plus, during and after a yawn your Leo will appear relaxed and fine, not startled or tensed.

If you see it open its mouth many times in a row (not just once or twice a day/night) but really like 5 times or more in a row then she may be having some food issues.

That consistent opening wide and closing her mouth would mean she is trying to work up the food that refuses to stay down.

It could be because she eats too much, or simply because the food is too big. It could also mean she has parasites or a virus that’s causing her to react negatively to eating – you should probably schedule a vet visit.

Just check the tank for regurgitated prey and keep a close eye on her for a bit. But don’t get worried over the little things.

Why is My Leopard Gecko Sneezing?

Your Leopard gecko sneezing could mean one of the following:

This article will help you determine what’s causing your Crested gecko’s sneezing and what you can do to help them.

RI is quite common in Leopard geckos and could be the cause of sneezing in your pet.

How Do Leopard Gecko Get Respiratory Infection?

Exposure to multiple environmental factors such as low humidity, high humidity, and others are the main causes of respiratory infection in geckos.

How do I make sure it is Respiratory Infection?

If alongside sneezing, your lizard displays any of the following symptoms then it could a respiratory problem:

Antibiotics is the best treatment for respiratory infections in leopard geckos. You can administer through the mouth using a syringe or via inhalation.

If that fails, you should take your Crested gecko to the vet for treatment.

Another cause of sneezing for leopard gecko is ingesting loose substrate.

Loose substrates could be coco fiber, debris, or sand inhaled and stuck in the back of your Crested gecko’s throat.

This can lead to irritation and eventually, your Leopard gecko sneezes in its bid to relieve itself.

Look around for the cause of your leopard gecko sneezing, if there is none, then the cause could be the loose substrate or water from frequently bathing your pet.

Easy! Change substrate to something that isn’t as loose or fine like:

This completely gets rid of the chances of your gecko inhaling or ingesting particles or debris.

If the sneezing continues even with the new substrate, you should take your gecko to the vet for further tests.

Impastation occurs when something gets stuck in your reptile’s stomach, and as such, they will attempt to sneeze or cough to remove it as they lack a gag reflex.

The causes for impaction include:

Symptoms of impacted gecko include:

You can use tiny amounts of olive oil to feed your Crested gecko through the use of a small pipette. This should work as a natural laxative.

You should make sure the temperature in their tank is not below 70°F. Anything lower than that and your Leopard gecko would be sneezing because of it being too cold.

Can Leopard Geckos Get Colds?

Yes, leopard geckos will get cold once the temperature drops below 70°F.

The recommended living temperatures of a Leopard gecko enclosure can be between 72°F to 75°F.

Don’t allow it to reach 80°F or more as that can cause heat stress and result in a dehydrated Crested gecko.

To track the temperature levels of your gecko’s tank, it’s recommended to use a digital thermometer.

A low humidity level would cause the air in an enclosure to be too dry for your leopard gecko.

So, providing your Crested gecko with all the right conditions is important for their overall health and quality of life.

Prolonged exposure to poor humidity levels will cause several health complications for your gecko.

Use a digital hygrometer to measure the humidity levels

Mold buildup or growth can result in your crested gecko sneezing and is quite common if:

You hardly clean the tank

You are reusing an old tank

The humidity levels are too high all the time

Do not reuse old tanks and decorations for far too long

The humidity levels should vary throughout the day – 60% during the day and at 80% during the night. It shouldn’t be constantly high

Leftover fumes from cleaning materials could also be the cause of your pet sneezing.

For example, if you use vinegar to clean the tank and some leftover is trapped in the tank’s air, it can trigger a severe case of irritation and cause your pet to sneeze or cough.

Clean and air the tank. There should be no trace of cleaning materials left in the tank.

You can do this by placing the clean tank outside (if you have a garden or a yard) or opening the windows in the room. 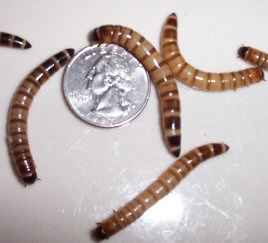 Superworms Vs Mealworms Nutrition for Pets