CAVES,.. grotty, miserable, muddy, cold claustrophobic places. At least that is what the majority of us think. Nicholaus Vieira is definitely not one of us, or normal per say. He has dedicated his life to the underground so much so it could be said he is addicted. After all spending over 200 days a year caving may be considered by some Crazy!

Not only is Nicholaus off caving in remote regions around the world, from the high altitude of Peru, the jungles of Mexico or the Frozen mountains of the Canadian Rockies. He is working as a cave guide in the Canadian Rockies, involved with cave rescue, instructing caving and cave rescue techniques, a member of various caving clubs, including exploration and scientific research within caves. Fewff! 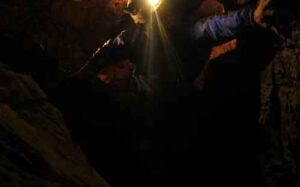 His true passion is exploration (and capitalising random words), venturing to where no human has ever been or seen before. As an example, you can see all faces of Mount Everest on your computer at home, but with the underground we have yet to figure out what is the deepest cave, and this we may never know. Going to extremes pushing his mind and body, over frozen landscapes or mountainous jungles, suffering through glacial streams he tries to shed light and understanding on these extreme environments. After all your head lamp is the limit of your knowledge of the terrain ahead.

When asked why he does it Nicholaus had this to say. “Everything you could imagine and more is involved with caving and caves. These places I venture into are important to everyone, we have been tied to them from our beginnings and we will be tied to them to our ends. And besides, who does not like being Indiana Jones!